A cooperative venture between ifa gallery and island6, reveals the various lusts, desperation and searching within the city, explored by 23 artists in any possible static and interactive media.

The new exhibition, Urban Lust 欲望都市, a cooperative venture between ifa gallery and island6, focuses on the role of desire as a creative impetus and environmental factor in the collective conscious and subconscious experience of the New China.

Shanghai is a city of profound ambiguity and many contradictions. Whereas most Chinese metropolitan centers find their identity in Chinese national history, Shanghai is proud of its colonial past. Its birth, growth, glory and shame all share a close relationship with the West: the colonial powers in the past and the transnational capitals in the present entail a cultural ambiguity characterizing the local identity through cosmopolitanism. This phenomenon accentuates Shanghai’s ambivalent cultural belonging: if Shanghai’s local identity is fundamentally based on cosmopolitanism and transnationalism, then it’s the most sensually and culturally consumable place in post-reform China.

There is a sizable culture industry that devotes itself solely to the production of myriad images and texts that showcase Shanghai’s real and most often imaginatively retrieved “colonial decadence”. In its cultural representation Shanghai has become a dreamscape, in the sense that it is no longer just a city, but a symbol for a desirable lifestyle, a model for post-socialist affluence. Discourse about Shanghai invariably resurrects its cosmopolitan reputation of the 1930s as a powerful leitmotif in defining its emerging global identity.

Such intensive visual and textual production of Shanghai has in due course made it the most “seeable” and “readable” city. With the manufacture of it as a dream-place or a dream itself, has desire become the social fabric which dictates our daily experience, personal and professional appetites and orientation in the metropolis?
Twenty-three artists of culturally diverse origins have developed original works around the theme of desire itself, and have sought to reexamine the context and definition of the term itself in an applied manner which directly bears on this city which they now call home. Eros, sexuality, and extremes of indulgence are built upon broken and fragmented preconceptions drawn from the social mores and predominant ideologies of the PRC and brought into stark contrast with the near mythical decadence and notoriety of the metropolis of Shanghai. Shanghai’s urban transformation in the past decade has meant, on the one hand, that the city is overwhelmed by commercialism and consumerism. On the other hand, every global city is inevitably associated with cosmopolitanism. In the end both determine the city’s ambiguous cultural identification. To expand upon a governing correlation with desire, or, more directly- lust, is a bold curatorial experiment as it transgresses the rhetoric of the PRC and denotes a trend most commonly associated with savage capitalism.

We observe images of youth pounding the pavements on skateboards; humorous dancing pastel figures sculpted in plastic, virtually void of any realistic detail; illustrations in ink and watercolors of contorted and reclining female nudes and cityscapes which denude an oppressive or stagnant atmosphere rather than gaiety and liberty. The interpretations of each artist varies widely and reflects the drama of individual youths and consciences caught in the wake of mass consumption, consumerism, survival and voyeurism which are so greatly a part of the experience of the metropolises of modern China.

Of particular interest, the series of Brilliant City, by Zane Mellupe captures our attention. The city as a desolate and futuristic site wherein individuality is lost in the gulf of anonymity, an Orwellian undertone of despair and decline which boldly challenges the nonsensical rhetoric of the myth of progress, of positive developments and comprehensive planning of the future of both the youth and the urban settings of China.

If desire is the stage, who then are the actors? In the erasure of cultural identity and tradition, what is the true desire and truths of desire for those who have sought and still seek to give expression to the daily mundane and trivial tasks of existence in a society evermore materialistic in an apparently spiritually vacuous urban horizon?
Globalization, rampant marketing and a new economic language and reality are answered incoherently, void of unanimity yet sincere in their independent strivings to address the machinations of desire. It’s the savage capitalism at work beneath the shelter of autocracy, the juxtaposition of Occidental externalization of desires, acquisition, the sexual freedoms and exhibitionism with that of Oriental extemporization, the restraint, reserve and subtlety that create for a fascinating visual experience in this collective exhibition. That which has remained hidden, marginal, peripheral or unwanted has surfaced in a curatorial selection which makes one face one’s own fallacies, illusions and question: in which way are we prey to our own desires in an era where archetypes collide? 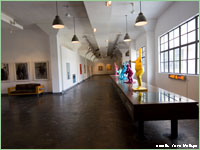 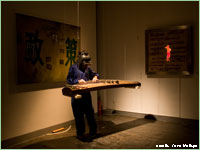 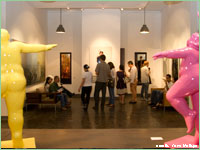 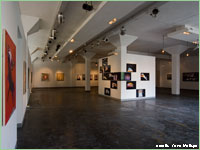 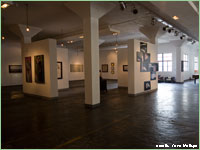