Christophe Demaître studied plastic art first in Kortrijk, then in Gent at Rik Vermeersch and Michaël Borremans’ studios. In the early 90’s, his work is oriented towards photography research, and he travels a lot through Europe and Asia.

In 1997, he settles in Italy for six years where he paints while developing several academic technics. There he starts to be renowned and exhibits in prestigious institutions. Christophe Demaître travels to Barcelona a few times, where he is inspired by the “Arte Povera” movement. After his travels, he decides to settle in Brussels and continues the work on photography he left aside years beforehand.

In 2006, Christophe Demaître is invited by Island 6 Arts Center in Shanghai where he develops his work using multimedia technologies. Fascinated by the ultra-dynamic city, the artist decides to settle a second studio in Shanghai where he spent half his time until 2016. He returned to Shanghai for an art residency at Swatch Art Peace Hotel in 2019.

To date, his work is renowned and is part of various public and private collections, including Power Station of Art and Deutsche Bank.

The Quixotism of Christophe Demaitre

In question of the artistic direction assumed by Christophe Demaitre, one faces a dilemma. The paradox of photographic imagery derived from a near nomadic lifestyle and whose content appears near centrically oriented to the urban experience and consequent alienation of humanity, and that of a process orientation wherein the artist shatters formalistic boundaries and discards pre-deliberation amidst the chaos of creation. His attention to material and adaptation imbue the oeuvre with a Neo-Dadaist spirit & serve to engage the viewer as he confronts facile dichotomies and roles attributed to documentary and lyrical, poetical photography. The artist enacts a random survey of scenes captured by the lens while wandering the streets of whatever city or anonymous street, individuals are obscured by an abstraction engendered in the process of emulsifying canvas and the subsequent, spontaneous layers of paint which arise in his final touches of creation.

Atonal, the fields of vision upon his two dimensional creations belonging to collage, etching, painting, printmaking & photography at once, render the human experience as an oblique, transient one: the poetics of a near existential perspective yet the obscured rather than visceral impact awakens our sensibility towards a collective experience which transcends limitations accorded by sociological or psychological schools affiliated with the photographic medium. One senses an itinerant voyage, a vagabond existence and the cursory and ephemeral aspects of our modern lifestyles are mirrored in a fragmentation of the moment.

The majority of the artist’s series seem void of coherency save for the instantaneous manner of their inception. Working with medium as diverse as sculpture, installation, photography and printmaking, Christophe Demaitre appears empowered with a naive although passionate command of material. Found objects are more often than not the base materials which the artist employs in his creative cycle, fabric, metallic, wooden or prefabricated objects, they merge in his hands as one final instance of creation. The tendency is obviously inspired by the artists’ brief exposure to Arte Povera while in Spain, as well as the conceptual impulse which equals that of the Fluxus movement. The work offers a poetical interpretation of life regardless, the dialectics of either school retreat as the individual yields his lens and returns to the studio to re-invent, interpret, deconstruct and find a new life in the materials themselves.

This sporadic nature leans towards a sheer chaos or sense of effluvium in the act of creation and it is this in itself which transfixes one. Sur-automatic creations ensue: minimalist sculptural works are made from scrap metal, generators & motors affixed for globes to oscillate or pendulums shift, spiral threads weaves shadows within cages and the dynamism of modern industry and it’s inextricable link with humankind is highlighted.

The themes of alienation and global refuse are provocative undercurrents in Christophe’s works, from frame to frame to lightbox or panel installation, pale figures of the era appear as shadow figures whom drift, merge and vanish within the multiplicity of his creations. It is a commentary, subconscious or not, on the itinerant and vapid dimension of our common day existence in the urban sphere. We are at once static and replica, at once alive and yet near death. The work constitutes a powerful omen of the subconscious wherein illusions fuse and truth ruptures.

The visual journey assumes a mnemonic character, the works sublimate experience rather than act as a “punctum” of time or space. The spatial creations are alive and given depth, as most evident in the multiple layers of resin upon which are infused photographic images are found in succession within the confines of miniature scale lightboxes. The panels denote the ephemeral and transience, and a kinesis of material and spirit are obtained. The quality is spectral, we are led to believe that Christophe Demaitre is able to encapsulate the momentum of the quotidian and house it in an animated state within metallic cages in display to the public conscience- if one may assert that such a thing does in fact exist- and the provocation remains subtle rather than bold or exclamatory.

What is doubtlessly accorded to whatever multi-media improvisation by the artist is the latent tension drawn from such intensity in the moment of creation: while his personal vision avoids predetermined ends, the evident sincerity and abandon to the process itself in each work furthers their subjective appeal. There exists a “lost voice” in the author of the artworks, there remains an innocence of discovery while in exploration of materials, themes and experimentation with form. The greater consideration given towards their content must then entail a philosophical detachment from the question of “form being beyond or separate from content” and that, rather, we are faced with the paradoxical emergence of a unique artistic vision wherein content is, to an extent, form.

While not entirely original as regards the conceptual act in creation, as we might include Surrealism, Sur-Automatism, Arte Povera & Neo-Realism in attempts to entitle his work, Christophe Demaitre nonetheless offers a true sincerity and sense of ingenuity while enacting the principles of process-orientation or Neo-Dadaist experimentation. While he transgresses boundaries, the attempts reveal a consistent method of conscious manipulation of materials in contest with a naïf spirit … as each work finishes within the studio, each acts in testament to the random failure or success to surpass the aforementioned contest and act as an answer themselves to whatever question or riddle of contemplation the artist has come to experience along this diverse road.

From a polemical dispute is born an oeuvre which has won international critical acclaim in recent years, and the artistic trajectory of Christophe Demaitre has proven to be an incessant and rather uncompromising exploration of whatever concept, idea or notion which has come to mind of the artist. In having avoided absolutes, preconception & extenuations of the ego (the artist himself discusses his work almost as an aside, as being apart from himself or personal acquaintance) Christophe proves to be an unsparing witness of the beauty, fragility and strength of the everyday and mundane of life. He documents with the lens, transfigures and lends an amorphic quality to the image with the dexterity of an alchemist and obscures self-referential systems as well as societal associations due to his “esprit saboteur”. His language is one of subversion and the impetus, one found amidst the chaotic vacillations of the day.

There is no end to his debate with experience. His allegiance is with experimentation itself and he seems to serve no other dictate than that intuited in the act of creation, in the moment of self-abandon as he joins material with movement and finds neither absolute truth nor epitomal revelation. Detached in spirit yet engaged in the moment of execution, his work is impossibly neither contrived nor derivative, avoids the snares of limitations born of the mind as we observe his examinations of the individuals to be found at any moment at any time amongst a nameless infinity of urban crossings, stations and re-instated upon his photo-sensitized canvas. The nameless of society are now effaced figures obscured in layers of ink, paint and paper…their countenance an echo of the lost, fragmented sense of identification which runs in parallel and without respect towards cultural boundary or definition in an era most often described as being one of “global” proportion.

Without end or intention, Christophe Demaitre appears as one of the few seminal witnesses of a time which is ridden with the nonsense of “globalization”, “internationalization” & their conduit, “cultural hegemony”. In embracing a lyrical employment of mixed media rather than obtuse adherence to the claim of the “truth” inherent in the act of documentary photography, his field of diffusion is of subjective and random “moments. What is achieved lies within a poetic obscurity, an intimate language rather than one easily categorized by the dialectics of commercialism and pedagogy. In close consideration of the artwork of Christophe Demaitre, we may find it apt to quote the Chinese maxim, …to cross the river while feeling for the stones “, as his sincerity lies in the touch of material while attempting to navigate the impossible straits of our time. 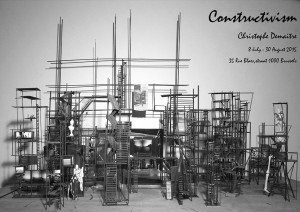 Drawing and what? – The Flaneur/Fine Art