The oil paintings of Zhang Kai denote the artists sensitivity to spatial environments, a peripheral vision which reflects upon the dichotomy of alienation, existence and urban solitude. A native of Hohhot, Inner Mongolia, the artist has written, “…inconspicuous and unobserved…they (telephone poles) are sculptures of the city, whose silhouettes may be found all over China”. His words echo the signals of life, interwoven in “…the form of the wire: simple or intricate, random or precise…”, a metaphor of alienation and the transformation which embraces all aspects of existence in contemporary China.

The earlier of the series reveals a prominent saturation of colour, monochromatic fields which yield a stark juxtaposition of the figures which are suspended in the immediate visual fore of the canvas. This acts as a subtle mechanism of detachment, and an acute extenuation of the themes underscoring the composition. Softened tones later surface, to achieve a diminished yet coherent exploration of the theme, and the chosen figures of dogs appear at random, encaged, floating, hidden or partly obscured. The weary guardians of aspiration, destruction and renewal, of hope and despair, seem to be mirror a voyeurism of the actual experience, while remaining subject to both the artist and experience of the city.

Zhang Kai does not further explain nor justify his work: juxtaposition, self-elect iconography and colours are left to the subjective appraisal of the individual within the audience. His intentions remains somewhat obscure, an expressionistic and poetic orientation displays the perpetual evolution of a simple thematic series. To cite the artist,”…the dogs…are also a language of their own…both the main characters and the opponents in the game…”. This play, in contrast with the “…the most desolate and uninhabited areas…icy and full of violence…lonely and helpless” articulates a certain despair and raises the question of the human condition, the profound sense of futility and nihilistic undertones which predominate consumerist culture and the abandon of self with the demise of the past, a past whether fictional or real.

The emotive force and the subtlety and nuance by which it has been achieve define Zhang Kai as an exceptional artist who possesses a lucid sensitivity to the small, and whose attention to the former in his work allows for a re-examination of the greater. The machinations of industry, urban renewal and catchwords of the vanguard of alienation echo throughout his work, yet, what is appreciated is a personal vision imbued within what otherwise might fail as a cliché repetition of the predominant themes & discourse of his generation.

Whether photographic or painterly, the process of creation behind this exhibition serves as an emotive vehicule rather than indictment, what is manifest in the artworks refracts daily experience, and is suggestive of an arrival, discovery …work which emanates the mundane and avoids the pitfall of allegorical observation. Subtle, unique, the work is an understatement of the reality of one alone with a world in rupture, of a creative impulse in catharsis. 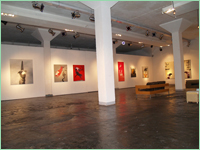 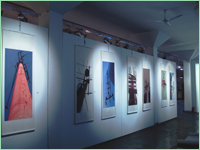 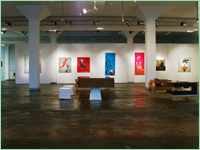