ifa gallery is spleased to present the group exhibition curated by Marie Terrieux.

As urban and social transformation has become such a crucial part of China over recent years, numerous artists, particularly photographers, are focusing on the city: its growth and energy, transformation, as well as destruction and demolition.

It is through the lens of their cameras that these four artists record the city.

Jia Youguang takes on the responsibility of interpreting the face of the new city and its evolution. Through his photography he describes the relationships between people and their city, the apathy and distance between the two. Individuals are enmeshed, like buildings under construction surrounded by scaffolding and building equipment, a symbol of China on the move. The new architecture can be on one hand alluring, on the other, unsettling. In his series, Jia Youguang closely observes the neon lights and buildings of Soho that are the city’s second skin.

The role of man in this architectural environment triggers many questions for Xu Changchang. He goes to the edges of the city, heading for the vast freeways and oversized intersections to tackle the topic of choice: to head north or south? toward what future? following what idea? He touches on the subject of freedom, the phenomena of ‘non-decision’ and of the contradictory nature of his country. Experimenting with digital images and Photoshop, the artist transforms the scenes in his images giving them a dreamlike quality and proposing a new reality that is sometimes fantastical, very often critical.

With an angel as a main character, the artist sets up poignant scenes, contrasting a constant element with one that is ever-changing, such as the father and son watching the evolving city. By creating this subtle conflict, he comments on the environment and the differences that are further and further pronounced. Spontaneity and nature are squashed by the artificiality of new cities, where the solitude and insignificance of man is more obvious.

For Liu Bolin, using his own image and playing with performance are fundamental to his work; his own body tools for his photography. His camouflage series “Hidden in the City” allows one to view space in a new way and encourages awareness of detail – such as slogans and advertisements strewn across the walls – and search for where the artist is hidden. An element of game is discernable in his works, yet it is the earnestness of his photography that predominates.

These four young artists are part of the generation that has seen and lived in a country undergoing extraordinary transitions for the past 20 years. Their way of seeing goes beyond the city to man himself, and each artist must be considered an important witness and a participant of the beginning of Chinese contemporary culture. 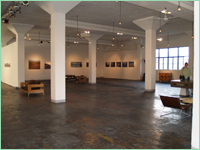