ifa gallery, with the kind collaboration of FEIZI Gallery and island6 arts center, is pleased to present “police and her” an exhibition curated by Darja Lin & Alexis Kouzmine-Karavaïeff. The performance during the vernissage by Mo Yanan

Police and Her draws together fourteen artists whom have sought to address questions of gender and authority with an intelligently provocative collective response, a thematically sound exhibition offering varying interpretations by each individual given independent locations in the actual site of the gallery space.

A delicate issue which pertains to a reality often indiscernible to the casual eye, the inter-relationship between women and policing authorities in the PRC, is depicted in an astringent manner. Frontal portrayals of the female form alongside/engaged with/subjected to/in oppositional contrast with immediately identifiable police reveals the complexity of what exists, in truth, due to an interdependency whose origin is socio-economic while simultaneously the fruit of oppression and gender discrimination.

The oils of Fan Jiupeng display highly figurative compositions of a woman freeing herself of a brassiere, without indication as to why or visual content which might suggest the circumstances.

Đỗ Hoàng Tường , a Vietnamese artist, offers two oil works where one nude and one semi-clad female figure adopt identical poses, their visage bearing traces of torment amidst a bold, colorist composition whose focal point is their vaginal area. Both culturally and compositionally neutral, this works resound with prominent tones of eroticism, sexual deviance and an implied force of gender oppression.

Tang Huimin’s photographic plates are the most contrastive and stark creations, three female figures are suspended beneath portraits of stoic police officials in full decorum, the expressionless “polish” of the visage of the officers is in polar opposition to the staged and highly dramatic facial contortions of the women presented in the works uniformly entitled, “Craziness”.

Shao Yi lends a signatory work where officers having imbibed alcohol are thereafter documented in a literal fashion, documentary and staged photographic intentions are thus combined and challenged in the work entitled, “≥80 mg/100ml”.

The Liu Dao collective of Shanghai is represented with two collective works, one is titled “She lived there for thirty Years”, where an LED sequence within a multi-media housing of wood, paper collage relays a subdued pose of a woman wearing a forest green dress, lying casually upon the floor of a derelict, near abandoned room. Captivity and surveillance, seduction and ruse, sexual desire and urban decay are interwoven in the multi-faceted creation.

Zhao Huasen delivers chromatic photographs of a surreal nature. The first composition shows a policeman reclining upon the back of a colourfully lacquered toy rocking horse, his face is the point of contact of a thread of red liquid which falls from an invisible source. The second is of another official, curled in an infantile manner upon a gigantesque flower, apparently asleep and impervious to the same invisible thread of red liquid which flows from beyond. These highly evocative photographic superimpositions are of greater visual force than the majority of the selected artworks.

Liu Bolin’s amorphic and chameleonesque signature is witnessed in this exhibition with two photographic plates wherein a nearly spectral presence of the artist himself is alternately displayed embracing a girl from behind with closed eyes and a near beatific countenance and another where the partially transparent self-apparition is grasped from behind by a non-expressive policeman, his eyes scarcely open. The former work is suggestive of compassion or protection, the later, … halting the action & persecution?

Within Police and Her there is ample evidence of less obvious visual conclusions of the thematic interpretations of the artists’ collective representation.

Su Ming is the author of two works which incorporate traditional Chinese techniques of painting upon newssheet, and the figures are of an iconoclastic female “hero officer”, common in the visual propaganda which abounds on televised media and billboards throughout the nation. Ironically, and poignantly, the artist has chosen to show the maternal side of the propagandist icon as she is breastfeeding in the derivative portraits. Visual context & scenes reminiscent of those diffused at the time of the Sichuan earthquake disaster converge and are given new significance in this series.

Li Meihua adopts a scenario of greater visual intrigue, with works of women enclosed within an X-Ray with random metallic objects placed upon them. The paintings invoke questions of observation and a near clinical analysis of the women, and yet, the objects themselves – if metal may suggest a violence of industry – contrast visual idioms of subversion with a direct, indelible “weight”. A visual counterpoint and one which echoes with the objectivization of women.

Ba Da leaves a singular work in conclusion to the theme: a stainless steel police hat. A common place and everyday object is transformed as an artwork, given stature beyond that of the original. A blatant work demarcating the societal reverence of the official, one having been rendered in a medium which in itself suggests a vainglorious tendency of the PRC in its’ caustic celebration of an eternal moral force. An actual and symbolic “crown”, emblematic of enduring resilience, moral hypocrisy & the untarnished truths by which corrupt legal figures protect themselves rather than those innocent souls of the city.

Deng Xiaolei series of three works combining canvas and sculpture are the sole narrative extrapolations upon the theme. The drama which is executed in a spatial manner is told within three scenes: first, a woman hounded by ten police officers while pushing a cart ahead of her, second, an upturned cart and the woman being surrounded by the policemen, the third, the confiscation of the cart and its disappearance in a police vehicule. This spatial drama is consecutive and yet, it’s end, unpredictable. Deng Xiao Lei has enacted a visual ruse which mirrors the nonsensical and unethical comportment of a legal body which seems to operate in a blind determination- of dubious motivations? – to arrest whatever and whomsoever. The role of the hero has been subverted and granted to the female figure, the police negate their own assumptions of glory and nobility in their absurd and profane actions caught in this static mannerism.

Mao Tongyan’s contribution of a photographic oeuvre strains the limitations of allegory, gender depiction and acts as a retort in the inverse expression of legal condemnation of one of the societies least vocalized, while simultaneously pervasive, vocations: prostitution. The prostitute is neither emblematic of the constituent body of women of the PRC, nor, paradoxically, in exception to the manifest discrimination by a paternalistic society. What effectively succeeds in the artists’ visual operation is the transfiguration of the prostitute by her wearing the dress of the police official at the site of her “transgression”. She is, at once, the witness of a scene of a crime and an echo of the dichotomy the “prostitution of power”. A curious triplet whom insists that we question moral code and manner: mannerisms of artistic interpretation as well as actual means ascribed to societal governance.

Zane Mellupe offers an axiomatic visual intervention with “Home”, where a woman appears curled upon the floor of an anonymous, barren interior. The super-impositions of this lightbox installation reveal subsequent visual planes where exterior/interior, natural landscape (in this case, a snow clad horizon of barren trees and staggered street signs) and portraiture fuse in subtle counterpoint. The cold white and pale hues of colour evoke strong sensations of alienation, solitude and vacuity.

Police and Her acts as an embodiment of the social and societal contrasts to be observed in the living truth of everyday modern China. The facile dichotomy of “oppressor” and “victim” is acutely evident on first sight, and the greater complexity of the truths which exist beyond visual immediacy surface on viewing the exhibition as a whole. Inequality, power and the disfiguration of women interact in a powerful current of expression. The subversion of power and its’ transfiguration answer in the visual subterfuge of the artists in face of an socially conscientious theme. Bold, provocative work which undermines “injustice” and enacts a reinterpretation of what might be “just”, where at all possible in a society possessed by a Machiavellian thirst for power . 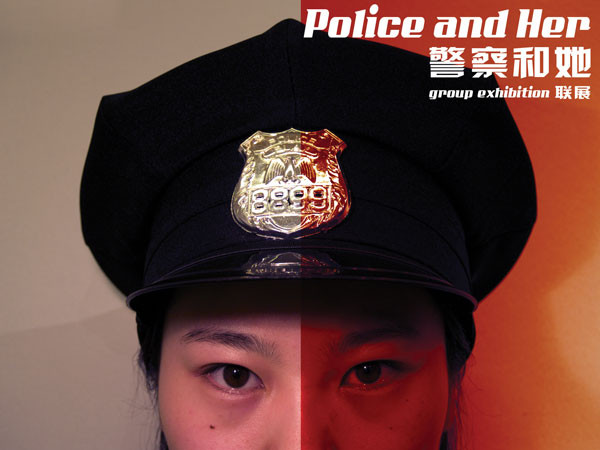 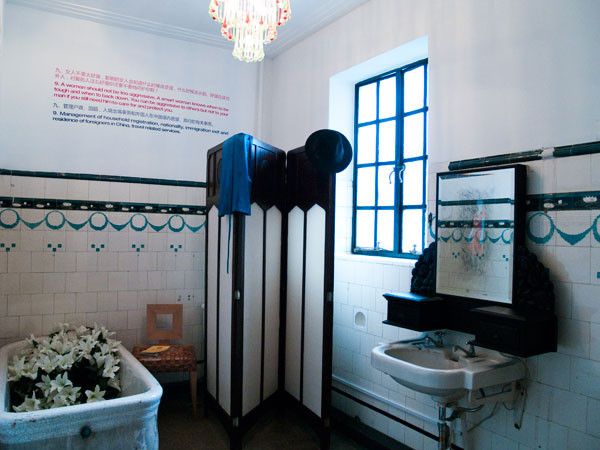 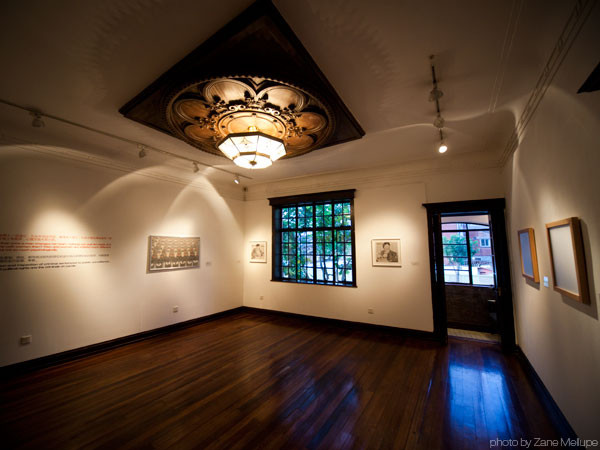 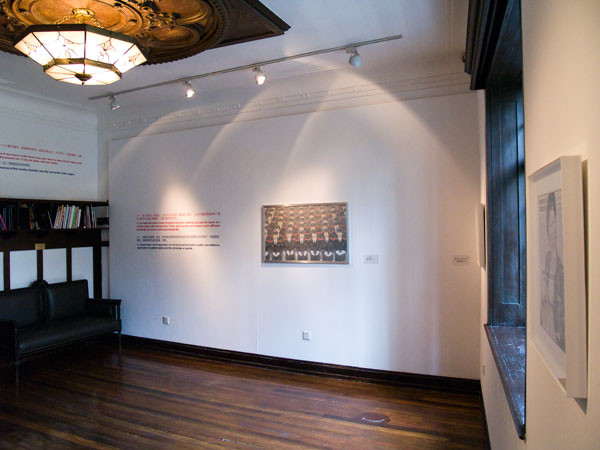 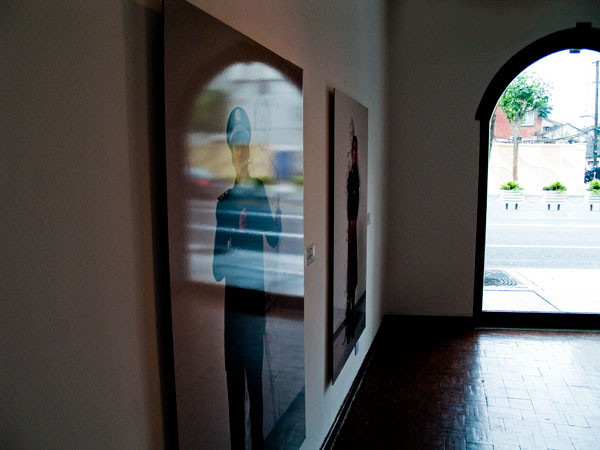 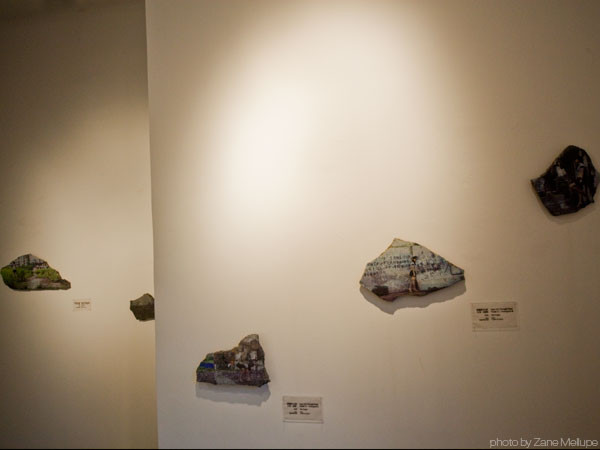 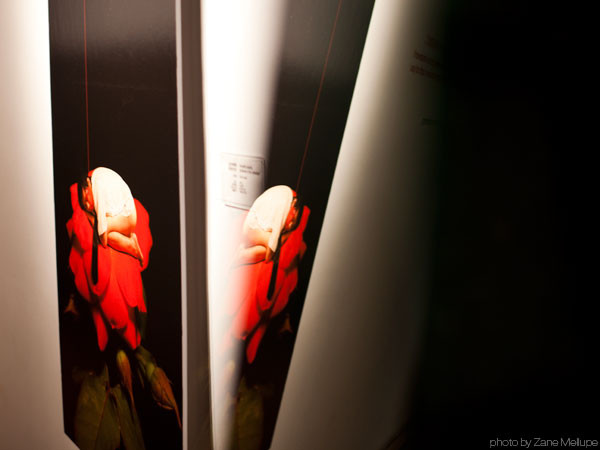 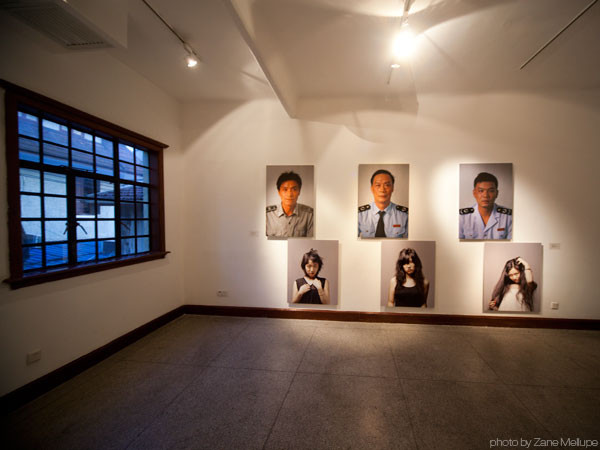 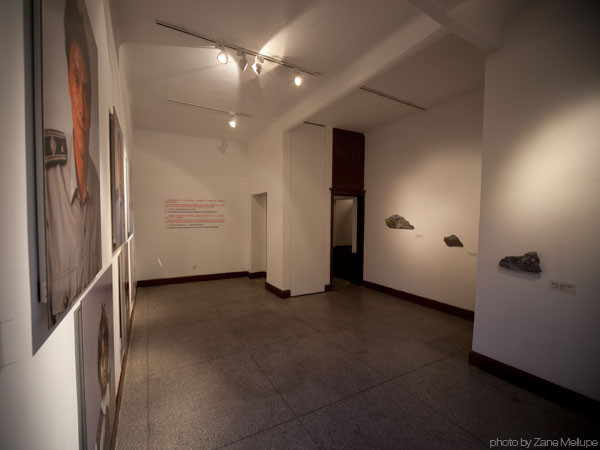 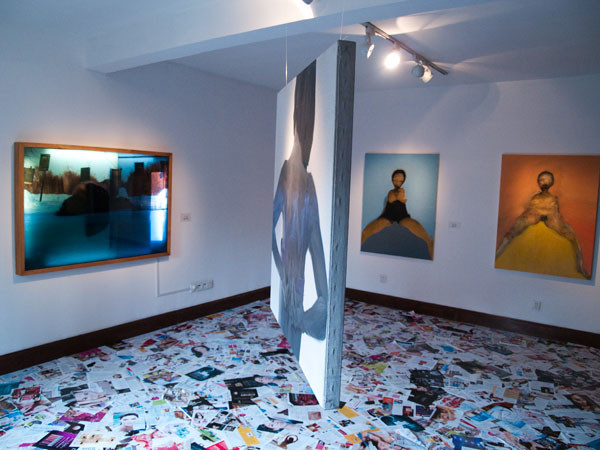