‘Ink Games’ is an ifa’s gallery exhibition curated by Bérénice Angremy and Marie Terrieux. This exhibition takes a revealing look at the universe of Dai Guangyu: a metamorphosis of ink, its symbolic power and its cultural, social and political references. Across the different floors of ifa gallery various are creative alcoves of this artist who positions himself as a socially engaged creator, working across the diverse artistic mediums of painting, installation and performance over the past 20 years.

Ink Games is a selection of works – photographs, installations, performances in situ – that illustrate the career of Dai Guangyu from the end of the 90s to present. Each floor in the house is organised according to a theme dear to the artist – Landscape, Performance, China and Art. The common thread of these works is ink – not the only medium that the artist is skilled and imaginative in manipulating, but it is one that he is most fluent in working with and is gradually becoming his ‘trademark’.

Ink is not only a part of Chinese culture but it is also a unique and specific part of China’s long history, well documented since the Han Dynasty (221 AD-220 AC). Ink is the origin of calligraphy and painting, traditionally thought of as China’s only true art form. Ink is a symbol for aesthetes, those who are guarantors of cultural transmission. It is the heritage of those who have ‘made’ China; a China that has endured from generation to generation, dynasty to dynasty. Ink also embodies the power that it has represented over time.
Dai Guangyu provides a continual reminder of cultural heritage, which is so strong that it endures to have a presence in daily life, along with the burden that it represents for those attempting to free themselve from it. At the same time, Dai points to the undergoing changes to the cultural model in China, and the disappearance of those values important to the educated, giving way to an essentially western model of globalised culture. This dichotomy of easily recognisable Chinese culture with globalised culture, is a reminder of what we have become in relation to the past, and also what we are doing to our memory.

The ink is in turn drawn, repainted, assembled, decomposed, deconstructed, thrown away, recomposed, clearly in the ‘process of being’.
In A Scenery I Once Knew So Well, an ‘interactive painting’ whose name comes from a famous verse of poet Bai Juyi (772-846), Dai Guangyu invites the audience to take a brush and ink and to repaint the lines of the landscape, whose form is well known and considered to be quintessence of Chinese art. The artist then reconstructs the painting by gathering together all of the ‘Ink Games’ in whatever fashion he chooses, to demonstrate that it is impossible to keep heritage in tact.

In the Landscape, Ink, Ice, Geomancy, Ink, Ice and Picturesque Landscape, two words related to landscape, shanshui and fengjing, are drawn with a brush on the frozen surface of a lake. The metamorphosis of the ink that is trapped in the ice over the winter captures poetically that no landscape is completely still, whilst the mark itself, Chinese culture, is at risk of disappearing.

In the photographs of the performances of Dai Guangyu, ink splashes and drips on xuan calligraphy paper, recreating abstract and unrestrained forms.
Ink drips from a crackleware porcelain vase, slowly revealing an ancient misogynist text written on white paper below it, whilst red roses in the vase wither (Quietly Moving). Ink drips down the body of the artist, symbolic of his powerlessness to control the time and changes to the new society (Incontinence). In Shooting At Myself, Dai shoots an ancient blue and white vase that splashes ink on xuan paper as it smashes, signifying that he himself plays a role in the disappearance of symbols of his culture. The ink in Awaken forms brushstrokes on women’s hands in actions demonstrating freedom, referring to the power that women can have through the act of enjoying their bodies.

A huge map of China, drawn with ink in a mound of flour in Borderline, gradually changes size and shape as the ink borders seep across the flour, giving China the impression of being a country in a state of continual development. Ink falls, drip by drip, on the babies of Hospice Care as if it were a nutritious liquid, even though it is obviously an inedible substance.

Returning to its traditional calligraphic form in New Calligraphy – Art Slogan, the ink humourously describes the boom in Chinese contemporary art. With the statement “Art can make you rich in just one night”, the work denounces the historic sales of art at auction that increased by up to five or ten times, the price of a Zhang Xiaogang or a Yue Mingjun painting. The eight Chinese characters form an ensemble of eight vertical hanging scrolls called ba jiao ping, a very traditional form of interior decoration for the formal room in the Chinese home. This somewhat kitsch proverb has quite a different effect from the traditional ba jiao ping, which generally is a sign of the wealth and good taste of its owner.

Dai Guangyu powerfully creates a universe in which ink is used in totally unexpected ways, and where there is a persistent reminder that culture is the history of memory and change. 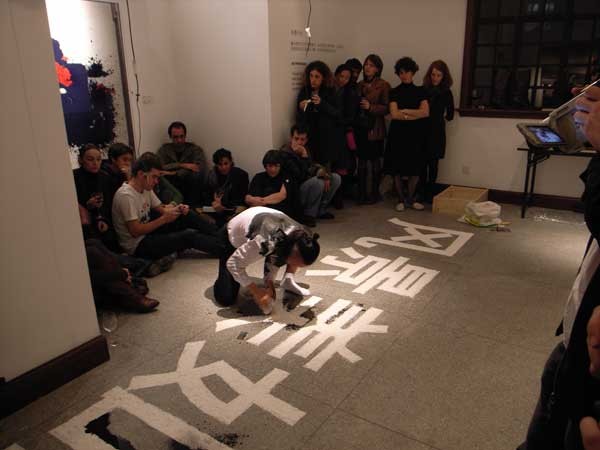 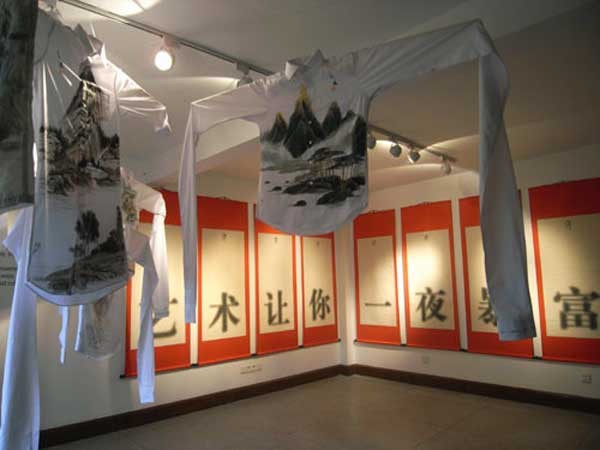 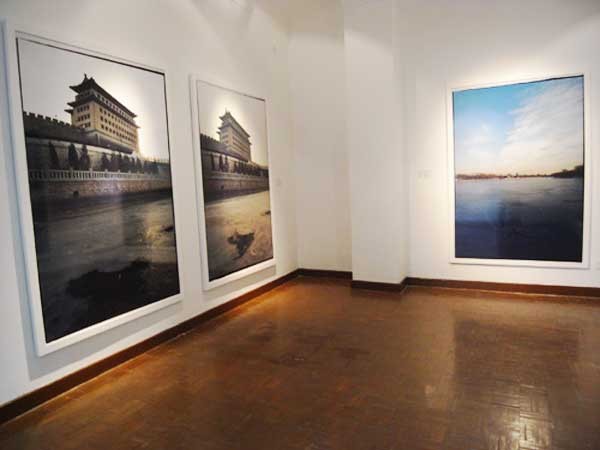 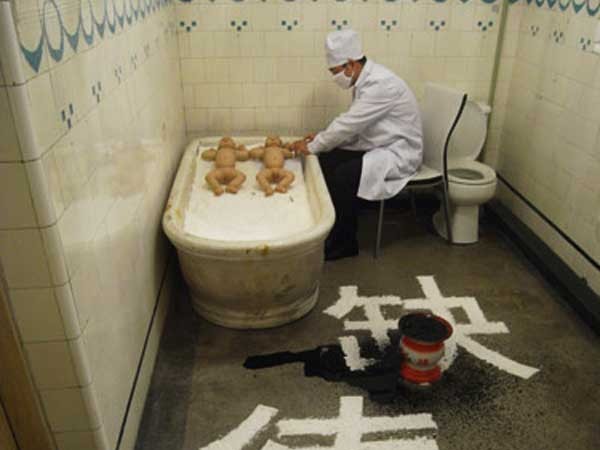 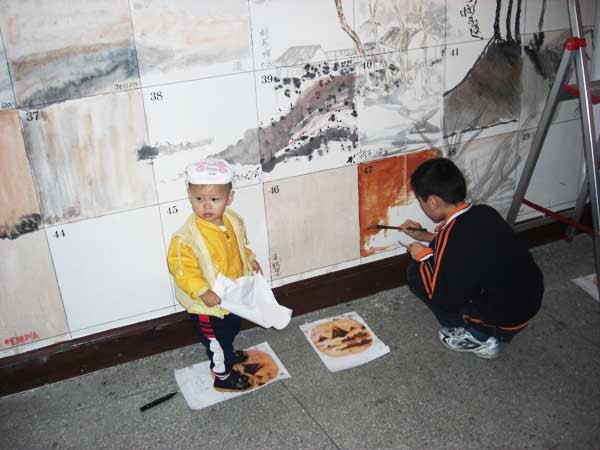 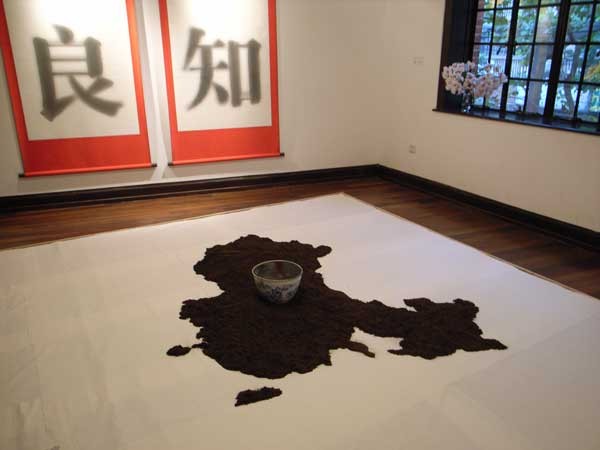 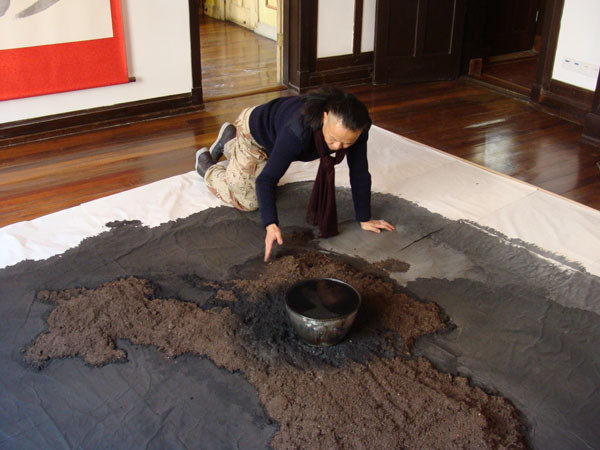 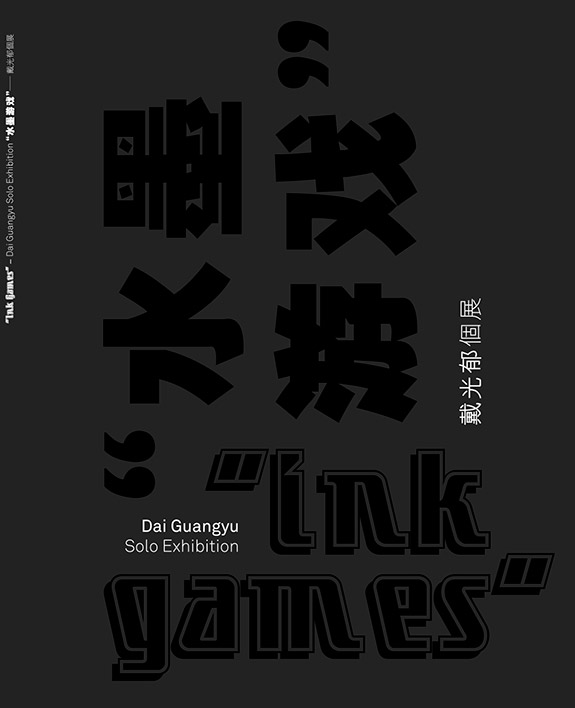