ifa gallery with the kind collaboration of YK art [Shanghai] is pleased to present the exhibition “different species” curated by Zane Mellupe.

The new version
The use of collage

My work is inspired by articles and / or images found in newspapers, magazines and old journals. I use collage as a way of infusing contemporary elements into my work. This word, phrase or picture then becomes the framework of the piece. Finding the right images to make the work appear as a single unit can be tedious and challenging, however I believe this process gives the artwork texture, depth and a familiar historical perspective by which the viewer navigates and understands the piece.

Water has been on the mind of many. The floods in Thailand, Angola and Bangladesh, Pirates in Somalia, Tsunami in Asia, oil rigs explosions, ocean liners in Venice & the running aground & breaking apart of a container ship off New Zealand. We have witnessed waters majesty and power. The sea, although calming and still, is often menacing and destructive.

Sea journeys, ocean voyages, and water. Throughout history, ships have transported slaves, goods, people, war and hope. An ocean liner or sailing ship may conjure up memories of vacations, romantic journeys or connections with separated loved ones.

These mixed medium paintings on paper respond to and reflect the seas ability to hold us. Each piece incorporates photos from newspapers, magazines and journals. The use of photo collage plays a significant role in shaping the images of our past. I use photo collage to manipulate this view and challenge our images of the sea. My work aims to draw the viewer into a space for thought and reflection.

I was conversing in a Venice cafe, enjoying the sights of the beautiful canal when I was startled by a tremendous sound from a ships horn. I turned and was surprised, shocked & silenced by a huge seven story tourist ocean liner manoeuvring down the narrow passage. I thought how ridiculous and tragic.
At the time, I was listening to the music of the Estonian composer Arvo Pärt. To symbolize the cadence of his deeply moving “Für Arlina,” each brushstroke was created using my left hand to deliberately slow my pace. I have placed the vessel in the vastness of the sea as a way of giving a big picture perspective; a way of slowing down the pace of man’s progress to dominant the sea. This was the first in the Ship Series.

In this work, I have fused together several sea situations: the BP oil spill merges with fishing rights in China-Japan’s disputed waters; a ferry mishap in Zanzibar pulls against certain demise. Although each event occurred at various moments in 2011, in the history of the sea, the merging of the three is just a blip, a brief interruption in the chronology of water. Yet, acts, ideas, or events can and will shape the course of the future and our final destination.

” …some will go after any boat — yacht, a cruise liner or a barge — hoping to find some good loot…
…some will hijack ships simply for the cargo …others will attack a boat to kidnap the crew in the hopes of a hefty ransom”
— From a CNN article entitled “Modern Day Pirates”

When I read about the incidents of pirates taking down cargo vessels, I couldn’t help but wonder what modern day pirates looked like. The image of pirates manned with AK 47’s, rockets and torpedo launchers differed slightly from my romantic view of the misunderstood, swashbuckler painted in movies. A sombre reminder that truth is not necessarily better than fiction.

Also known as ARS is the coordinated rescue and search of the survivors of water emergencies. It includes seaplane(s), helicopter(s), submarine or rescue boats or ships. The idea for this painting came from viewing the rescue efforts for the Japan Tsunami.
As the events unfolded, the scale of the operation seemed small in comparison to the magnitude of the problem. Yet, the image also invoked a sense of hope and deep empathy. The terror of the sea softened by the site of an elderly person or household pet lifted to safety.

Territorial Waters, according to the UN, is a belt of coastal waters extending at most 12 nautical miles (22 km; 14 mi) from the baseline of a coastal state. The territorial sea is regarded as the sovereign territory of the state, although foreign ships (both military and civilian) are allowed innocent passage through it; this sovereignty also extends to airspace over and seabed below. The nautical miles are set up to avert disaster. The unfolding events over the Senkaku/Diaoyutai islands seemed headed for certain disaster. In this piece I have turned the big three military players into mermaids to mythically rectify the situation.

This work was inspired by an article in which nuclear energy was used to fuel a ship created for breaking through ice. “Breaking the ice is also a way of diffusing tension in conversation. On a personal level, this piece marked a breaking away from my old job and ideas of security to embrace the changes ahead.

Also known as “Mermaid Syndrome,” is a rare congenial deformity in which the legs are fused together giving the appearance of a mermaids tail.
As of 2011, the People’s Republic of China has China has 14 nuclear power reactors, spread out over four separate sites and 27 under construction. China has also earned the right as the number one buyer of luxury liners in the world. I have fused together luxury and nuclear power to symbolize the fast rise of luxury brands in Asia.

What is a flood?
The volume of water within a body of water; The overflow of an expanse of water that submerges land

Why do humans continue to inhabit areas threatened by flood damage? Could it be that the perceived value of living near the water exceeds the cost of repeated periodic flooding? And why is it mostly the poor who are affected ? Taking the poem of Leonard Cohen as inspiration, I have merged images of flood victims from newspapers, creating an unending historical chain of man’s interaction with water.

The vast grey ocean of wind

I was listening to the poetry of Leonard Cohen when I came across the image of these three makeshift rafts, victims of the latest in a slew of worldwide flood related disasters. I wanted to juxtapose them against the vastness of the sea. The ocean liner in the background is neither rescuer or antagonist, rather absent observer

“The world feels strange now, even the way clouds move isn’t right,”
These words from a Tsunami flood victim, were embedded into the piece months later as a suggestion from a friend who mentioned that the work needed narrative. She was right of course.

The law of the sea states that fishermen should abide by territorial boundaries when fishing to avoid stealing for livelihood.

This law, set in place to curb large scale commercial fishing, has had adverse effects on local fishermen who have used the waters for centuries as means to support their families and make a modest means.

I wanted to compare the futility of man law to moving a beached whale. We can try to cover it, but in the long run we cannot do anything to stop it 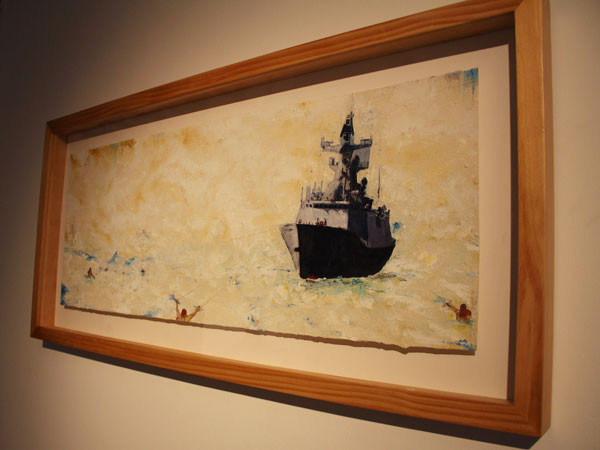 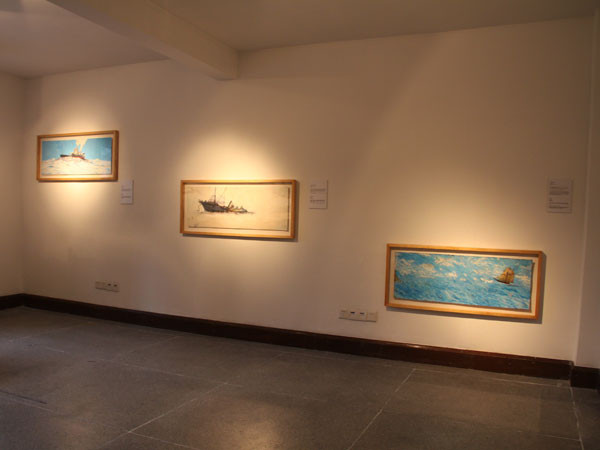 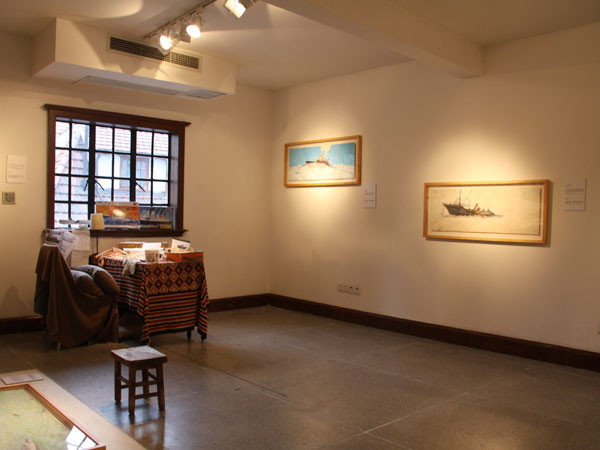 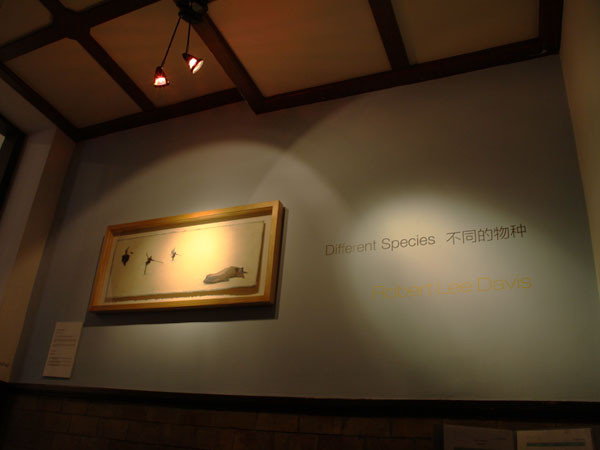 solution? what is the name? solution? other thoughts?