“Symbiotic Cloud Intelligence” is an installation using data form Witness Your World, transposed as physical representation of the computer cloud. For Wintergeest//Ghost, the Cloud exceptionally takes the shape of the cross. 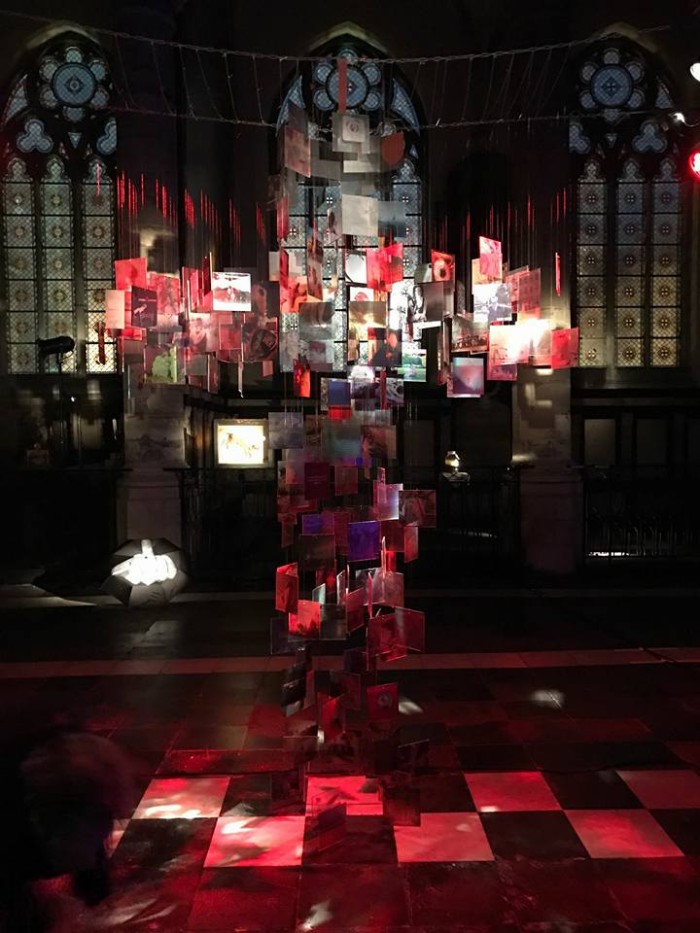 Of the couple of dozen theories that aim to explain how mass media impacts art, how many of them are still valid today, when mass media unquestionably metamorphosed into social media? Social media has had an exponential impact on the ways people interact with each other and the world. Twitter, Instagram, Facebook and others have changed how individuals receive their news, do business, form relationships and structure their careers. It is this interplay people have with each other that is the drive affecting the artistic production.

Today, anyone can take a photo of a scene, which can be perceived as artistic, and share it with others. This, in turn, could be claimed as art, which reinforces the idea that every one of us has at least one, two or three great photographs in them.The Internet at large, and social networking sites in particular, have blurred the distinction between front and back stage, something that some social theorists would argue is a feature of postmodernity. In a postmodern society, public and private merge and cannot be clearly separated. Sociological changes like these caused by social media can have inherent advantages in several areas of life.

Witness Your World produces artworks, mashed-up by automated algorithm and without any deliberation. Users submit pictures and messages, which can be voted for or against by other members of the network. The highest- voted works get mashed up into pieces of art.

The content of the images and messages function as an instant mirror of society: information of the immediate and even the super cial often opposed to the content in photojournalism or staged photography. Contributors share their world with the online community, and each submission eventually ends up being part of one of the artworks.

Photography emulates the way our mind freezes a signi cant moment. What is shared on the platform is immortalized in an artwork and becomes a window into what happens now for future generations, thus functioning like a ashbulb memory of our current society.

It is thus the task and mission of the artists to mirror social phenomena. The Internet, social media and crowd sourcing, became tools to create art that has meaning beyond just an image. Accessible and global because these tools are. Witness Your World is a way of creating a sense of identity in a uniform world: submitting pictures and messages are ways of making statements about who we are. Descartes famously wrote, “I think, therefore I am , which we might now alter to “I share, therefore I am .