In between at ifa gallery

We are torn between two eternities. Awaiting us at the end of our timeline is either salvation in heaven or demise in hell. Every step we make leads us closer and closer to one of these after lives. Sometimes we can experience a portion of these eternities in our conscious and unconscious life. Brief feelings of euphoria from seeing a loved one resembles heaven. Watching death and pain surround you in a warzone feel like stepping into hell. Life’s decisions guide us toward one of these fates. Our progress in life leads us further from one and dangerously closer to the other. The question is, which is awaiting us in the end, heaven or hell? Have we already arrived?

ifa gallery is a four story old British house stationed on Changde Road. Behind the doors are layered the depths and dreams of reality. Each room represents an idea of either life or the afterlife. The hallways act as a transitional state between these. Entering through the wooden door, you are given three choices. Do you turn left and enter ‘the World,’ turn right and enter ‘Sin,’ or continue straight and dive deeper into the unknown?

‘The World’ consists of the works of Shanghainese photographer Zhang Xianyong. One of the surprising features of the room it’s in is the flooring. Instead of the traditional carpet or tile flooring the ground is made up of grass. This feature is not part of the exhibit. It is one of those unique traits that define IfaGallery. 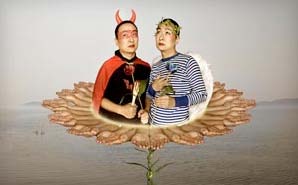 All of Zhang’s work is an extension of himself. In each of his photographs all the actors are the same person, himself. This can be simple, such as Geminate Flower(1) where Zhang is a devil on the left and an angel on the right blooming out of a flower composed of hands. This shows the duality of the artist’s nature.

His other works are far more complex. In Memory he plays sixteen different roles; each character a different age, social class, and gender. Incorporated in each photo are traditional Shanghainese themes. The three on the cycle in the center of Memory are wearing the traditional uniform for the Navy. This look has become popular with the Shanghai and Chinese youth, similar to how American youths wear camouflage shirts and pants. The red silk scarves they are adorned with are part of the mandatory school uniform during the artist’s childhood. All the characters have the traditional Shanghainese face make up of rosy red cheeks and thick eyeliner.

Across from ‘the World’ lies the culmination of the city’s sins. Lying on the floor is bear skin rug in the shape of a human. This piece entitled, Trophy and the target practice silhouette etched in granite called Moving Target(2) are from the mind of Zane Mellupe. These represent the dehumanization our sins bring upon us. 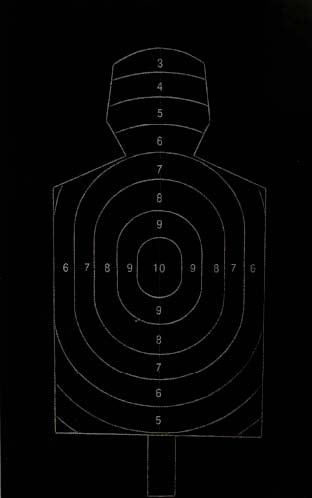 Along the east wall hangs the dark works of Chen Weide. His three piece series KTV shows the hidden part of Shanghai behind closed doors. The faces are blurred and unrecognizable. Deep, dark browns and reds show misery, destitution, and misplaced lust. Each painting represents a broken life filled with apathy. Sins with regrets.

Split in the corner is Man Ting Fang – The Fragrant Garden of Beauties. This painting acts as the magnum opus to the three KTV paintings. Two men lay on couches in a private, dark red room surrounded by beautiful women in golden dresses. On the table is enough alcohol to bathe an elephant. The golden dressed vixens resemble fallen angels from grace, nothing but beauty and decadence. Every character is looking off in the distance, staring toward an intangible escape from their decrepit ways. There are three things that can destroy a man: alcohol, woman, and gambling. All three are present in this devils hideout. On the north wall is a long scroll inscribed with the sins of our generation. On top of the scroll is a pen for you to add your own.Lastly the east wall holds a strange, out of place, piece. Xu Yihan’s ‘Giving up on Love’ is a woman’s delicate face painted with soft light colors. Staring directly at the painting, the face almost appears faded as if the woman is a fading memory. Under her left eye is a barely noticeable tear. Maybe sins aren’t all those dark evils that we think of. Maybe not pursuing a love that should have been is just as great a sin.

After escaping the sins, you make your way to Purgatory. The small hallway houses two more pieces by Zane Mellupe, Guilty and Not Guilty(3), and ‘Looking for Love’ by Xu Yihan. At the end of the hallway is a two image hologram of a woman. ‘Judgmental Gesture’ is a cardboard cutout mirage from German artist Roland Darjes. From one angle it is a Chinese woman in a floral patterned kimono with her eyes closed. From another angle she is staring back at you with warm eyes. He describes it: “’Judgmental Gesture’ is about being noticed as a person. The first second you come in a room; somebody sits across you in the subway or just passes you on the street. There is only one moment given to you before you are categorized by the people around you. It can be really decisively intense, like love or hate. And this moment for me is like going through purgatory; and then it is gone.”

Ascending the first set of stairs leads you to the 10 commandments by German artist Christin Kalweit. Lining the walls are depictions of the 10 holy commandments found in Chapter 20 in the book of Exodus. Each is displayed in a lit box representing an individual commandment. The people in the picture are blurry and the only color is red. They act as a warning. The picture displays the ramifications of breaking these commandments. As an added bonus, there is the unofficial 11th commandment: love your neighbor as yourself. Since this one didn’t make it down the mountain it isn’t considered canon. This commandment differs from the rest. The primary colors are white and grey with a little red added in. On the wall is a chalkboard with some spare chalk. Listed are the commandments that should be part of our world today. Similar to the Sin List on the first floor visitors are encouraged to write down their thoughts. Some notable ones are, ‘Thou shalt know thy heart’ and ‘Thou shalt live fully your life with as little mess behind you.’

Up one flight of stairs brings you to ‘the Heaven.’ During the day the light seeps in through the thin curtains onto the paintings. The room contains an old fireplace and wooden mantle. All these things mixed in with the rustic atmosphere of it all makes the room reminiscent to a childhood fairy tale or a dream or a simple form of heaven.

On the east hangs only one piece by Dai Guangyu. The portrait is a looks to be taken from a boat in the middle of a vast lake. In the background forest and mountains spread across the land with the soft white clouds looming above. This piece was created by combining ink and color on xuan paper, cutting it up into tiny parts, and then resembling it back onto a canvas. The other paintings are from female Shanghainese artist Zhu Ye. These six paintings are part of her ‘Floating’ series. Each one depicts a man or woman effortlessly floating along the cool blue water. The characters appear at rest, one with nature and him/herself. The series go on the body of water becomes larger. Floating 6 shows a man adrift in the sea with nothing but his thoughts.

At this point we’ve seen it all, well, almost. The only room left is the deepest darkest places of the human soul. The fourth and final floor contains the manifestation of the sum of our evils. Venturing toward this unholy ground one feels doubt about entering. The final stairway is known as Doubt and contains two pieces. A colorful design hangs on the wall. The piece was created by Deng Yu. On the corner of the stairs is Please tell me a story(4) by Zane Mellupe. This installation is a large wooden door containing multiple doorknobs on each side. It is created from old machinery parts and wood. There are some missing doorknobs on both sides. These represent the stories lost to time, never to be told again. Both sides of the installation have door knobs showing that stories can enter you into a new world or have others join yours.

Now we enter into the darkest reaches of ourselves, the Hell. The devilish works are the efforts of Shao Shao and Liu Bo. Spread throughout the west wall hangs the ink drawings by Liu Bo. These drawings from the young artist are from his ‘Tearful Comedy’ series. Each one shows the dark humor behind death. For example, Tearful Comedy 2 has a baby in utero under the spot light of a stage. The stage is decorated to look like old Victorian style houses with a patch of forest separating them. This scene may be highly offensive to those looking at it as an analogy for abortion. Upon further inspection the artist is trying to say that we are born on this stage, that our whole life is a play and only in death are we done being actors.

Liu Bo describes his series as “Human, comes alone to the world to play a proper ID of his own. Sometimes there is no audience when you perform, but you are still trying. Encompassing the rest of the room are the mixed media works of Shao Shao. On each corner are highly descriptive black and white photos of Caturmahārāja, the Four Great Kings. According to early Buddhist teachings, these four occupy the four directions: Dhṛtarāṣṭra of the East, Virūḍhaka of the South, Virūpākṣa of the West, and Vaiśravaṇa of the North. The north wall plays a black and white video installation made by Shao Shao. The eerie images depict his interpretation of the Buddhist cycle of death. The center of the room hangs large fabric installations similar to traditional Peking opera gowns. Imprinted in silver are transcendental imagery of the Buddhist afterlife. So ends our journey through Hell, Doubt, Heaven, and Purgatory. We stand near the entrance caught between one last choice. To the right the World, to the left Sins, and in front of us the wooden door that began us on this voyage. Between the World and all its Sins we open up the door and venture out into the vast unknowns.