vernissage on Friday 13 May

The impostor is dead, long live the artist! In November 2015, when Tao Hongjing was opening his new exhibition in Beijing, international press including the Beijing Morning, The New York Times and L’Express, were reporting on an extraordinary intrigue. The talented artist Tao Hongjing, an upcoming figure in the Chinese contemporary market over the past ten years, was none other than French artist Alexandre Ouairy. The conceptual artist had developed a split personality, an artistic performance allowing him to work beyond his own limits. In the words of the Goncourt prize-winner Romain Gary, alias Émile Ajar, “The habit of only being oneself ends up completely depriving us of the rest of the world, of all other beings; “I” is the end of possibilities.” 1

ifa gallery takes up the challenge of organising the debut double exhibition: both posthumously of artist Tao Hongjing, a borrowed identity definitively put to rest, and of contemporary works from artist Alexandre Ouairy.

Born in Nantes, graduate of the National Superior Art School of Grenoble, Alexandre Ouairy has been living in Shanghai since the 2000s. At this period, contemporary Chinese artists were much sought-after both in China and internationally. Even if his work aroused the interest of local galleries and exhibition curators, such was not the case for collectors, at this time wishing to invest mainly in Chinese artworks, the “hot investment” of the moment.

Alexandre Ouairy then had the idea of creating a Chinese pseudonym. “In Shanghai there was imitation Louis Vuitton or Prada everywhere. So I thought: if they are making fake bags, why shouldn’t I make a fake Chinese artist?” Ouairy explains to the AFP journalist. He adopted the name Tao Hongjing, a surreptitious reference to a 6th century Chinese intellectual. Overnight, the works of Tao Hongjing met with growing success. Assisted by his Chinese gallerist, from whom he borrowed some details of personal background, Alexandre Ouairy contrived the biography of his Chinese alter-ego, graduate of the Shanghai Theatre Academy and the National Superior Art School of Grenoble. Passing himself off as his own assistant, he attended all his exhibitions openings, with his gallerist taking on the role whenever a journalist or collector sought to have personal contact.

Thus Alexandre Ouairy carries out a truly long-term artistic performance, managing to create a double personality for himself, imbued with Asian culture. Tao Hongjing exhibits in many museums, galleries and art fairs. He is subject of no less than eight solo shows, applauded abundantly by art critics, whilst also participating in group shows alongside Alexandre Ouairy.

And then on the 4th April 2015 (Qingming Festival, also known as Tomb-Sweeping Day), the news breaks out: Tao Hongjing passed away during research on his latest project. Alexandre Ouairy has decided to bring down his mask and reveal his true identity. The audacity of the artistic imposture, the quality of his artworks and the recognition by Chinese intellectuals all contribute to this incredible sequence of events, creating a sensation in the media.

However, it is not a process of cultural mystification but rather of integration, a re-creation of the artist’s creative processes. A borrowed name becomes a synonym of liberty in an age of formatted thinking and pigeon-holing. Many writers and artists have employed pseudonyms to allow themselves to create free from the constraints of preconceived ideas that critics might take from their biographies: the French writers of the Resistance of the Second World War, and several woman writers who sought to gain acceptance within literary circles (the Brontë sisters, George Sand, Marie de Heredia-Reignier…). Other artists employed a pseudonym in order to be free to change literary style and affirm themselves as multifaceted talents. The painter Eugène Galien-Laloue allowed himself four different names for four different veins of inspiration, whilst the writer Boris Vian created the American author Vernon Sullivan in order to write a detective novel in a style considered scandalous, I Spit on your Graves, about the difficulties of Afro-Americans in the southern states of USA at that time.

In this way Alexandre Ouairy produced, during a ten-year period under the name of Tao Hongjing, powerful conceptual work that makes fun of stereotyped vision of the art market and the value given to so-called exotic cultures. This borrowed name gave him the legitimacy to examine the recent economic changes of China. Installations, neon, sculptures, and paintings: the work of Tao Hongjing is varied and questions the codes of Asian contemporary art. His works on rice paper exhibited at ifa gallery form part of the series Safety First. The images are created from the artist’s red ink stamp, the traditional signature in China. The superimposed seals form the contours of the ancient industrial neighbourhoods of Shanghai, evoking the disappearance of one state of affairs and the incessant reconstruction of another, such the first piece in the series, a ship carrying export goods, symbol of the first steps in China’s economic rise. By using the stamp, rather than ink, to create his images, he causes both the image to become elusive, and his artist’s signature to become illegible. The image is both constructed and dissolved: a trace of things past.

Alexandre Ouairy is also exhibiting his most recent pieces, undoubtedly his most radical. Absence and the notion of disappearance, hovering between reality and fiction, is one of his key concepts. At first sight, they would appear to be black light-absorbing panels. They are in fact photographic works printed on black paper. Upon closer inspection, one can make out the ink relief, from which the image can been pieced together though never entirely seen: an atomic mushroom, a wreck, a riot, a fire … so many states of emergency, rapids passages from a presence to an absence. The work presents a trail of incidents, previously seen but no longer existing. In a similar vein, the artist’s sculptures, never before exhibited, are presenting themselves as charred models of places or things in a state of precariousness – an aesthetic of chaos.

The works of Alexandre Ouairy, like those of his alter-ego Tao Hongjing, are an experience of absence and pose the question of masks: between reality or an incarnated fiction, which is the more real?

1 Romain Gary, Les trésors de la mer Rouge, folio, p.109-110.The aging writer, frustrated by the jaded greetings his work got, created himself a double, young and talented, émile Ajar. Creating another author gave him the opportunity to re-invent his writing style and win the Goncourt price twice, in 1956 and 1975, matter that would not have been possible otherwise. 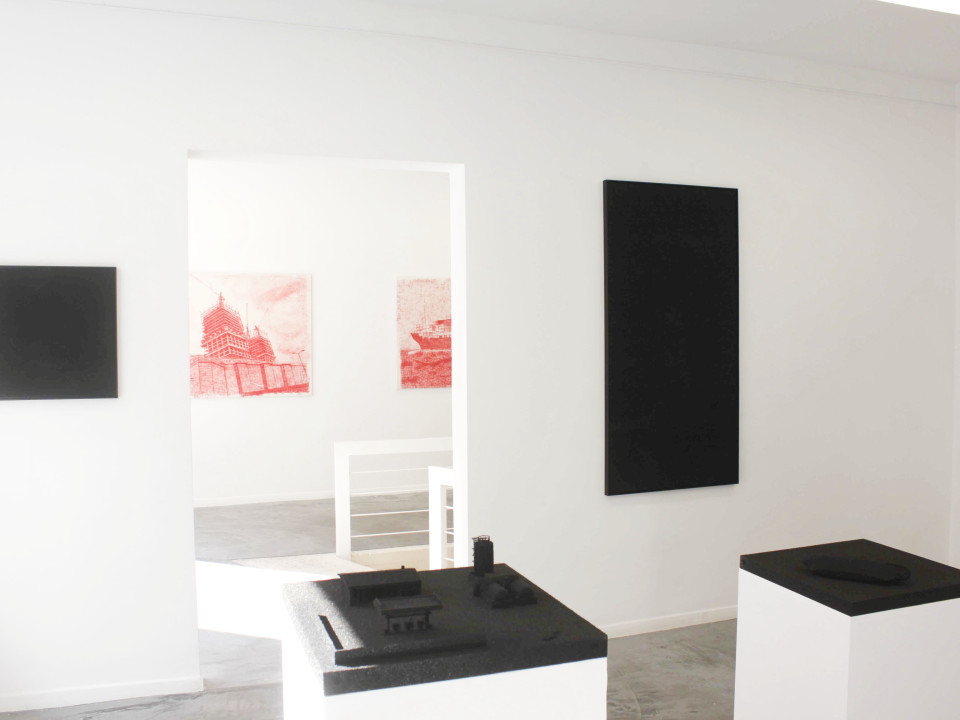 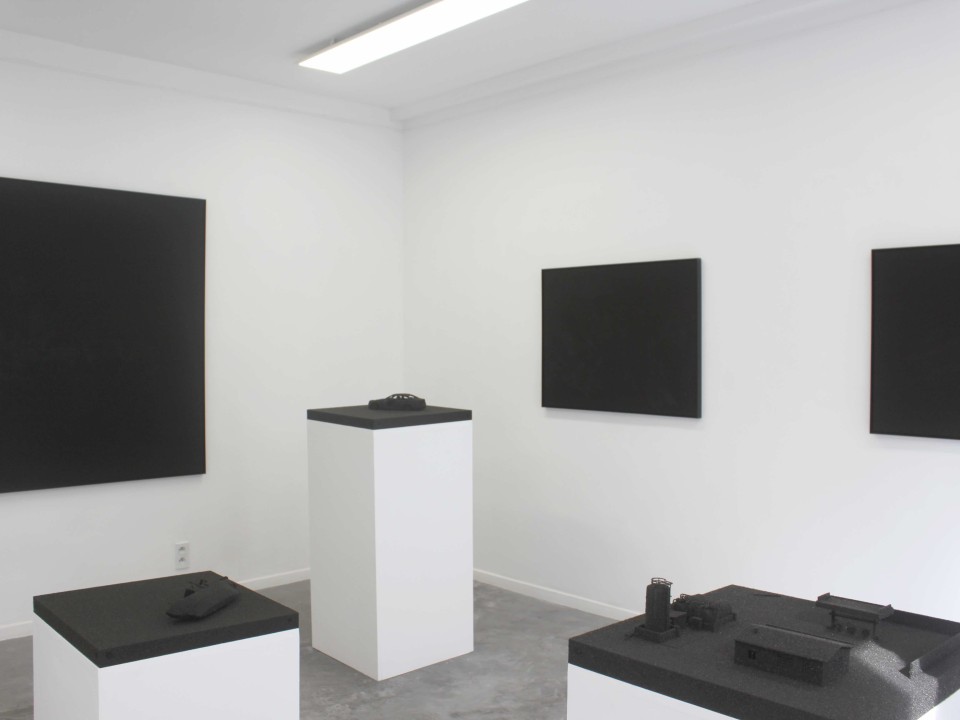 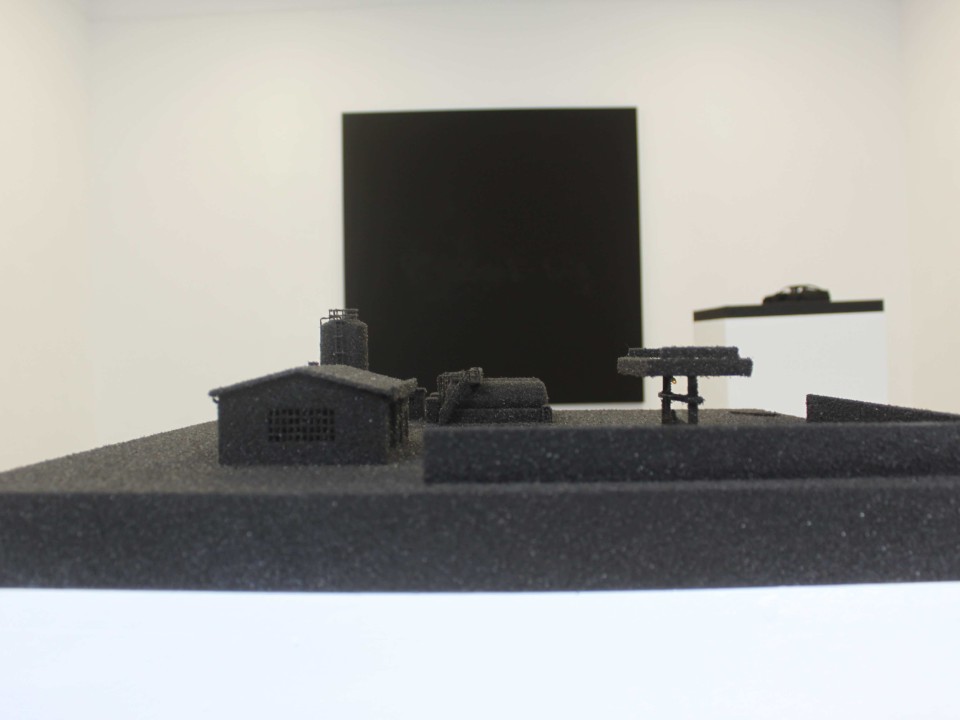 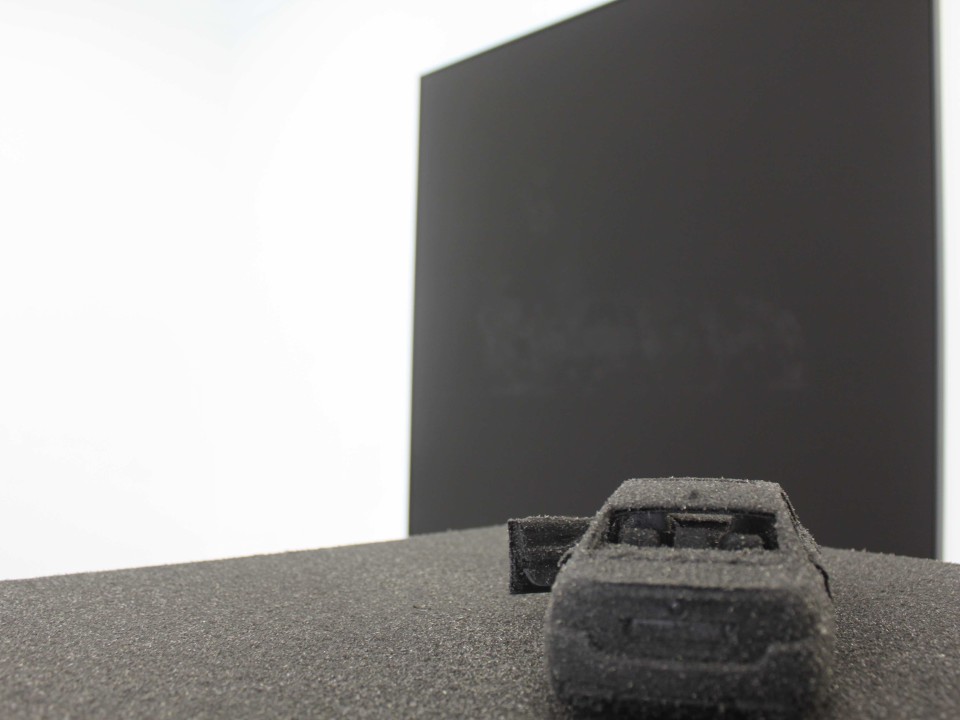 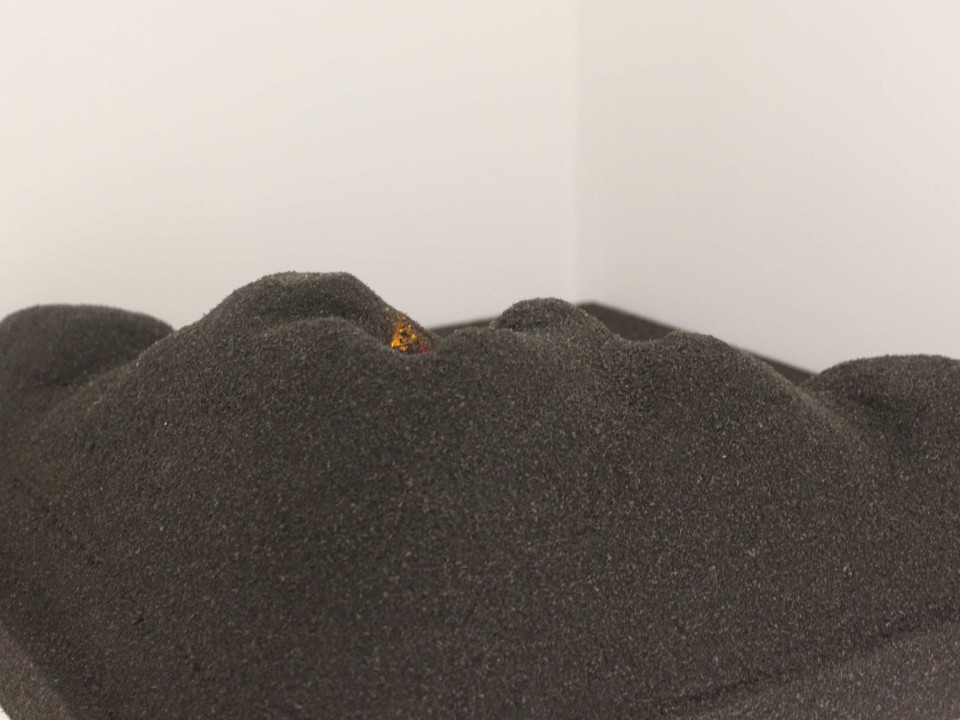 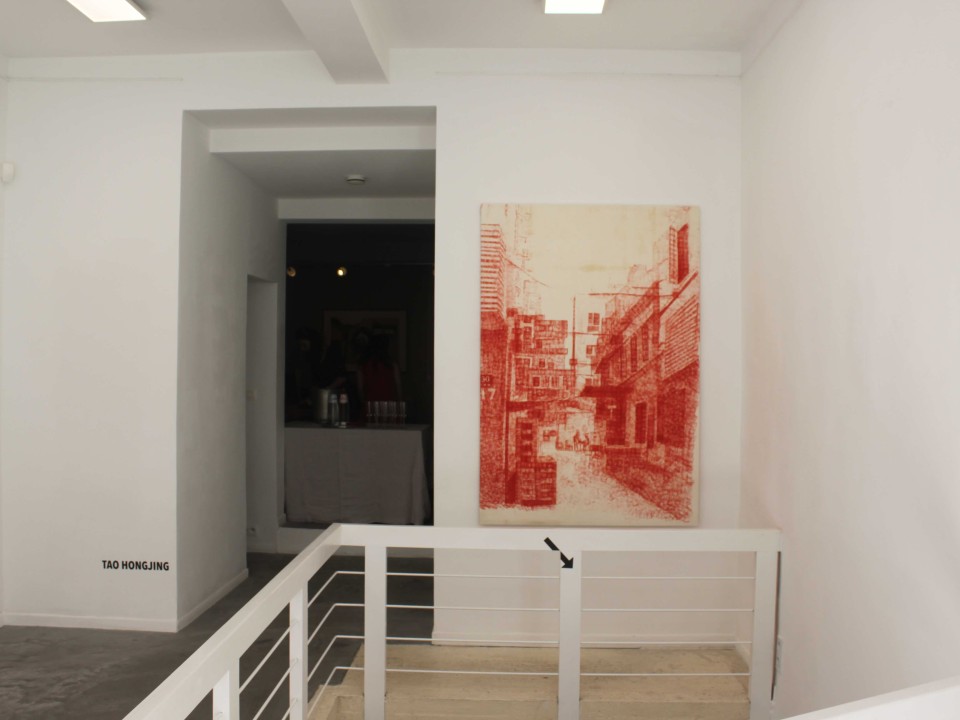 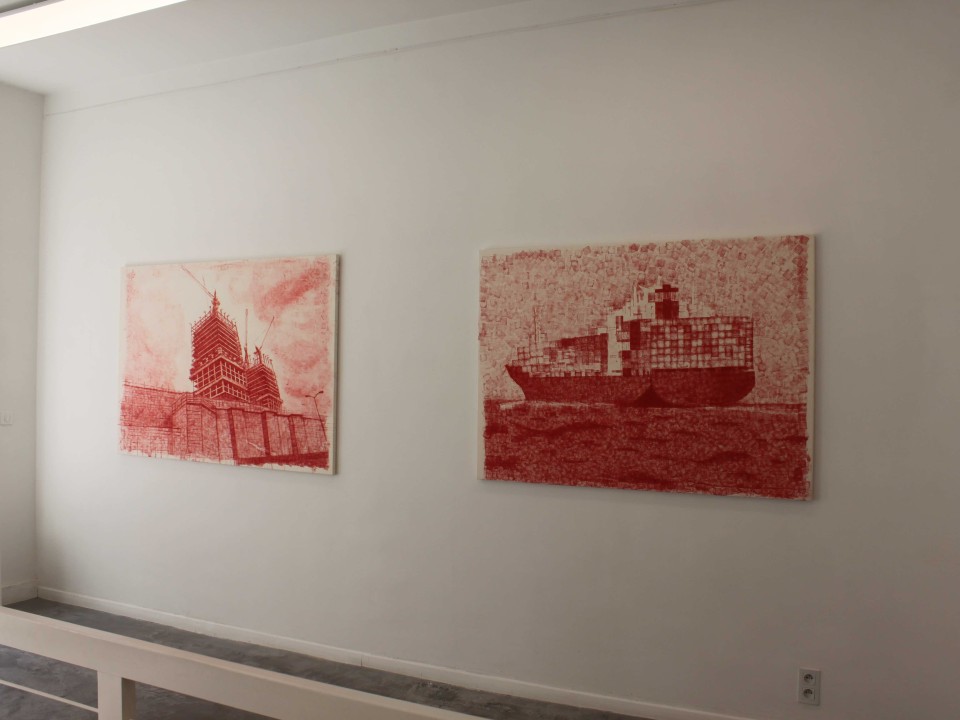 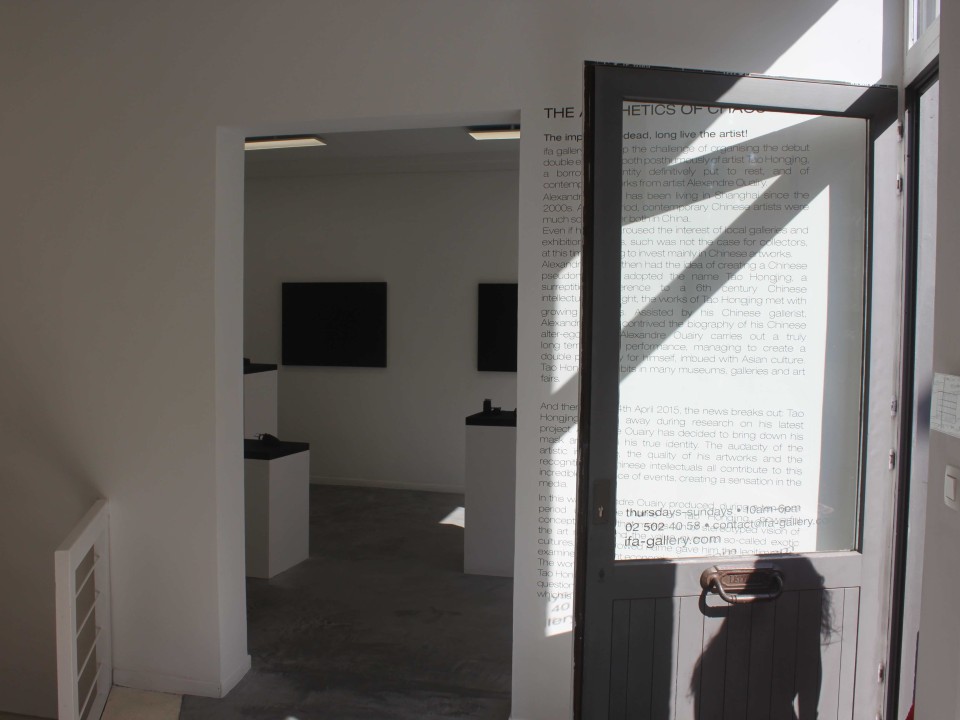