ifa gallery, with the kind collaboration of Galerie Quynh (Ho Chi Minh City), is pleased to present “beneath my skin”, an exhibition curated by Marie Terrieux and Alexis Kouzmine-Karavaïeff.

The works of ‘Beneath My Skin’ may be regarded with Western intuition and references, the viewer naturally connecting them to the works of great masters – Bacon, Schiele, Basquiat, De Kooning.. And, certainly, we may also have the tendency to seek Vietnamese sources – Buddhism, sacred paintings, ancient rites – within each of artists – Do Hoang Tuong, Nguyen Minh Thanh, Dinh Y Nhi and Ly Tran Qunyh Giang. Yet, it would be a pity to entertain comparisons and parallels, which are simplistic in nature, as what should be seen here is not only a question of cultural identity or combination alone, but the personal language of these painters and wood carver.

Each expresses their concerns toward society, a great introspection reaching beyond the question of physicality. Further, they search within their subconscious and reveal to the audience a range of emotions, from bitterness to cruelty. Regardless of cultural origin, here the artist tends toward making his voice heard, and above all, unveiling his soul, going beyond the corporal or figurative confines.

These four artists, two men and two women, all have their stylistic and technical particularities: Minh Thanh experiments on Do paper, Giang with wood carving, Do Hoang Tuong and Dinh Y Nhi either acrylic or oil paint. They live in the North, in the centre or in the South of Vietnam. Some are very engaged in the artistic scene, others are more discreet. Yet, they retain a common denominator, or, rather a word: melancholy. This state, associated with black humour and sentiments of profound sorrow, clearly binds the body and soul, as originally this returns to the medical theory of four humours that determine our temperament. This sentiment of melancholia is equally palpable in Vietnamese literature1, in fables for example, as well as certain contemporary dance practices2. Coincidence, or a particularity of Vietnam? This reflection arrives as a contradiction to the presuppositions above!

Do Hoang Tuong (born in 1960) offers oils on canvas where the woman is more than simply present, imposing herself on the canvas, and above all, her sufferance and solitude transpierce us. Do Hoang Tuong was part of the group of abstractionists whom installed themselves by majority in Saigon during the 1990s, painting the traumatism of the war, as well as the new urbanism of their nation. Yet for him abstraction was no longer sufficient, he found the need to pass from whisper to scream. It was thus that the figure took priority, often strongly expressionist, filled with violence and sorrow. It was for the artist the common lot of all, with happiness only a rarity.

For Ly Tran Quynh Giang (born in 1978), this conflictual relationship with happiness perhaps appears all the more prominent since the animals and human figures which she engraves in black upon delicate bark are symbolic of her own isolation and rapport with the world. Her extremely tortured figures are at the frontier of morbidity, the hands or emaciated limbs cry for help, and dive within a profound sentiment of anguish. She binds – or imprisons – these personae, as if to self-protect and withdraw into her own body, rendering herself immune from the exterior world. The technique of engraving demands consistency and rigour, differing from oil painting, which she also practices, where the rapport with the material is more immediate.

A sensual relation with the physical is evident in the series of Dinh Y Nhi (born in 1967). She loves the contact between her hands, pigments and the canvas. The brushstroke of the young woman is extremely spontaneous, all while mastering the colour and the line of her figures which she has been depicting for over a decade. The tones have evolved: the 90s were dedicated to monochromatic tints, from grey to red – the subject being the human condition; today with a larger palette, she speaks of women, from Asia, crossing their stories with her own. Her very primitive figures lay the body bare, the female body. Yet the artist insists that the gender of her subjects is without importance, she desires that the viewer finds a mirror within her canvases and loses himself beyond the limits of the figurative composition.

This exploration of an intimacy, double fold as it combines both that of the painter and also that of the observer, is also a characteristic of Nguyen Minh Thanh (born in 1971) whom has used dô paper to rest his autoportraiture for several years now. Differing from the three other artists, he proposes an oeuvre softer in appearance, more peaceful, with a floating and poetical sensation. Too often assimilated to a group called the Hanoi Triad, Minh Thanh was marked by the influence of the teachings of Truong Tan, the first avant-garde artist of Vietnam during the era of the Doi Moi (1986), the opening of the nation. Yet, contrary to his mentor, his work is less in rebellion, more in the quest of purity, of perfection. It is strongly tied to Buddhism, where the human or physical representations may vary, yet where the soul is unique. It is this quest of the absolute that Minh Thanh tends towards. These last years, his personae is effectively liberated from tensions which were earlier characteristic and aesthetics surfaces a priori with soft nuance.

In the attempt to penetrate these works and the direction of these artists, their different stages in life and maturity must be considered. Minh Thanh, for example, retired to the center of Vietnam, more calm, propitious to the change of his work; Dinh Y Nhi became a mother, more of a woman perhaps; Do Hoang Tuong belonged to abstractionists and was categorised within a certain group, yet he followed his own path and decided to a return to the figurative, a direction less common than the reverse; whereas Giang, while still at the beginning of her career holds a pronounced style and a darkness which belongs to herself alone.

Contrary to A Snapshot of Contemporary Vietnamese Art, which made a statement on the general ambience of contemporary art of Vietnam and the reflections of a society, Beneath My Skin proposes the personal vision of four artists whom have chosen more traditional mediums, who question their entire being and, in subsequence, the soul of the spectator. They are timeless. One of the missions of art – if art has a mission – is it not to act as both a mirror of our sentiments and a catalyser of our emotions? 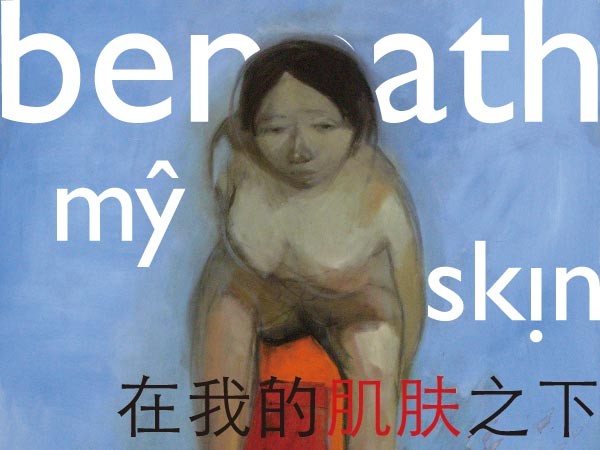 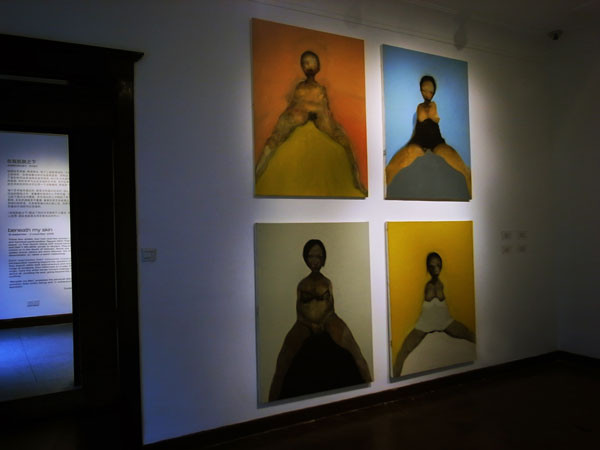 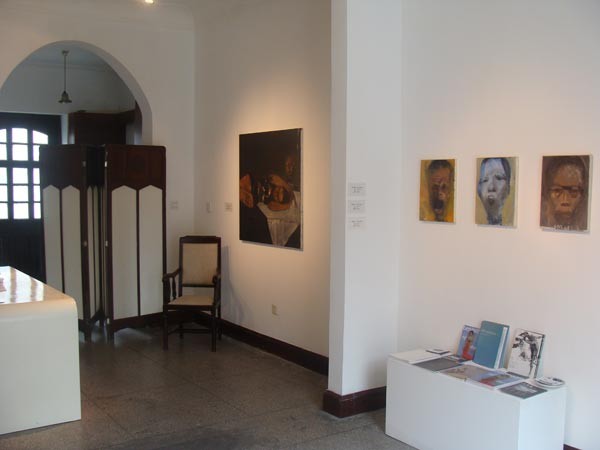 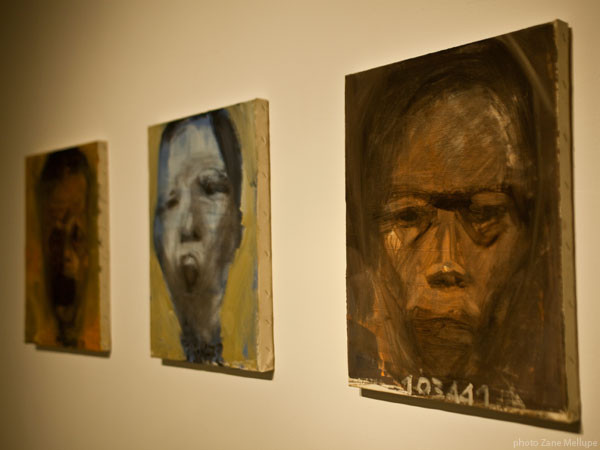 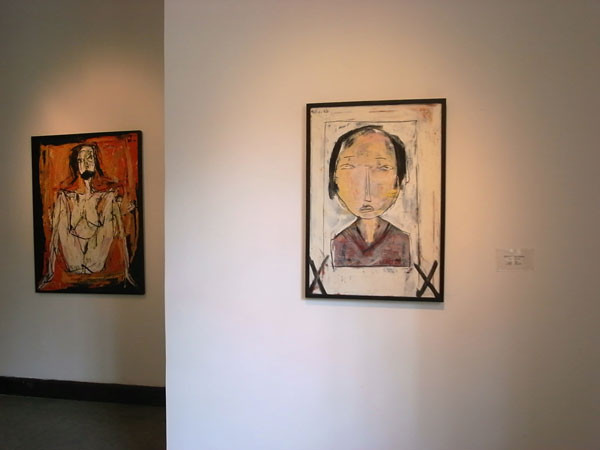 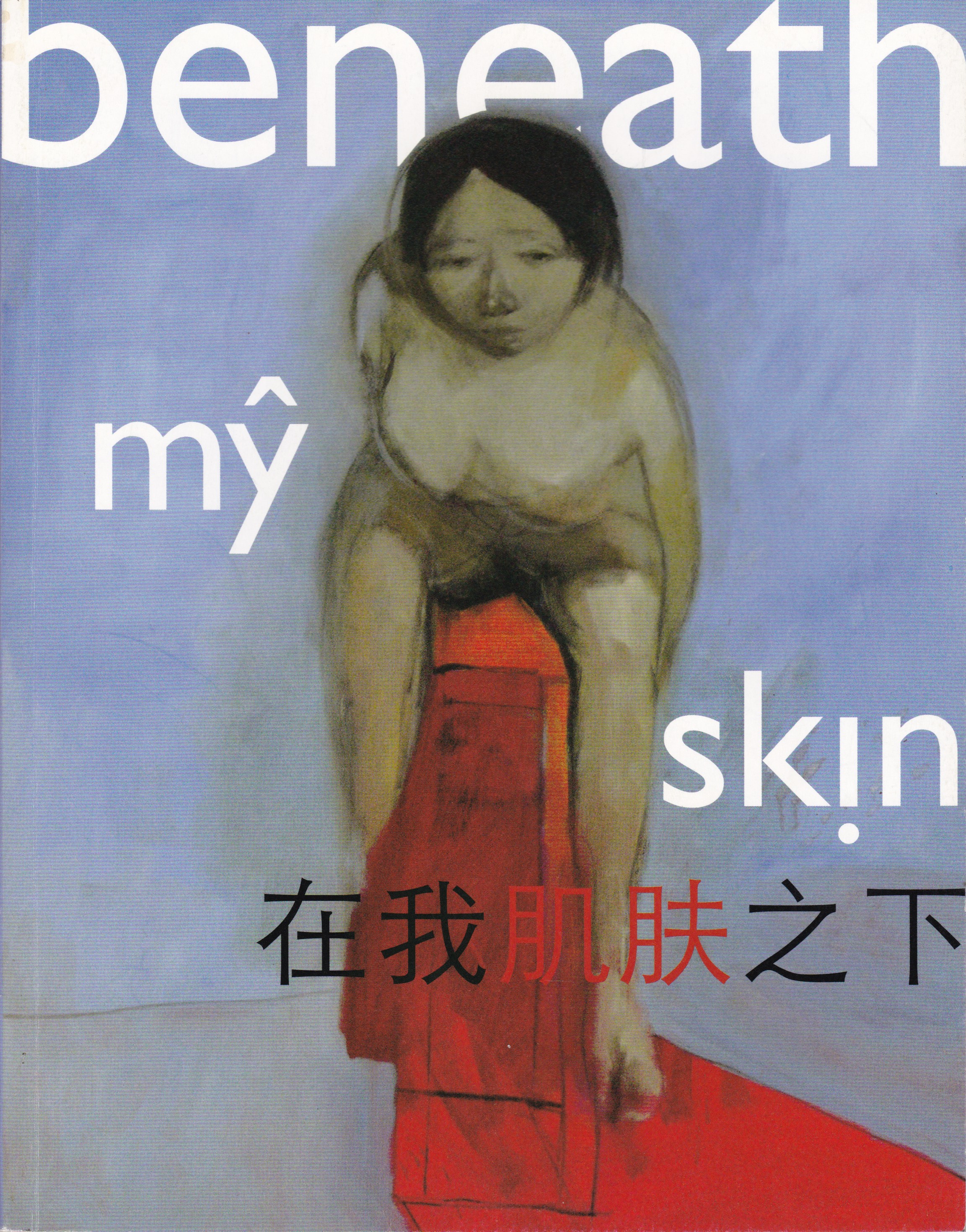 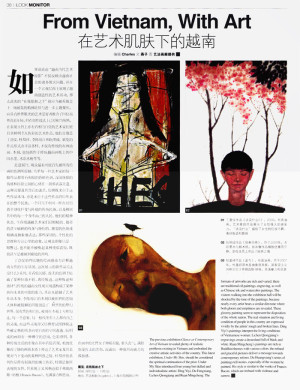 From Vietnam, With Art – iLook